How it all began

A Yorkshire lad from Malton in the North Riding, James began working in kitchens in 1984 at the age of 12, as a pot washer for the Castle Howard estate where his father ran the catering operation.

But it was a trip to the chateaux of southern France a year later that got him hooked on fine food and set his culinary career path. At 16 he enrolled at Scarborough catering college, where he was named Student of the Year for three years running, and by 1991 he was honing his skills under Anthony Worrall Thompson’s eye at One Ninety Queen’s Gate in London.

James worked for leading chefs in several capital restaurants, including two-Michelin-starred The Square and Harvey’s, and gained further experience in Michelin star establishments in France before returning to England to become junior pastry chef at the luxury country house hotel Chewton Glen.

In 1994, just before his 22nd birthday, James achieved his ambition of becoming a head chef, opening the original Hotel and Bistro du Vin in Winchester.

It was appearances on The Big Breakfast and Ready, Steady, Cook that launched James’ TV career in 1996 – and he’s barely been off our screens since.

Countless shows followed over the next decade, including Entertaining with Jame, Use Your Loaf with Paul Hollywood, Kitchen Invaders, Housecall, Delicious! and Castle in the Country.

As a celebrity chef, James caught the eye of Strictly Come Dancing bosses and in 2005 was partnered with Camilla Dallerup for the third series, reaching the semi-finals and claiming fourth prize.

Audience pulling power guaranteed, James was named as presenter of BBC One’s Saturday Kitchen in 2006 and his decade-long tenure was a huge success, more than doubling viewing figures to peak at 2.7 million.

His first prime-time TV series, Sweet Baby James, came along in 2007 and he also appeared as co-host of The Great British Village Show. 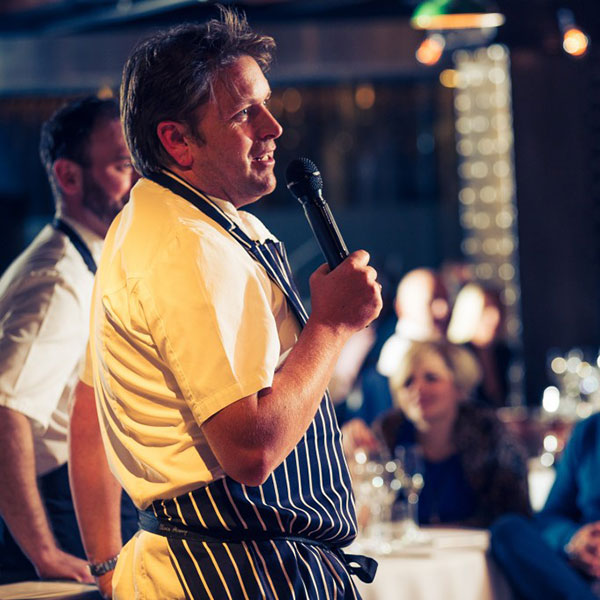 BBC One’s Operation Hospital Food challenged James to revamp the menu and catering facilities at Scarborough General Hospital in 2011. A second and third series followed and the project remains extremely important to James, who became an honorary patron of the Hospital Caterers Association in 2015.

A self-confessed petrolhead, James interviewed Sir Jackie Stewart for BBC Two’s Racing Legends while driving through the Alps in a Pantera supercar in 2012, and also fulfilled a lifelong dream when he drove Stewart’s F1 car round the Monza circuit.

Numerous other TV credits include United Cakes of America, The Great British Budget Menu, the BAFTA-winning Junior Bake Off with Mary Berry, and the immensely successful Home Comforts which ran for three series on BBC One. James is also a permanent member of the judging panel on The Roux Scholarship.

In 2017, he returned to the weekend morning schedules, this time on ITV with Saturday Morning with James Martin.

In print and on the road

Eating in with James Martin, published in 1998, was the first in a long line of best-selling cook books, many produced as companions to the TV shows. His autobiography Driven came along in 2010.

James writes a regular column for the Daily Mail’s Weekend Magazine and has also written about food for GoodFood and Ideal Home magazines and about motoring for the Mail on Sunday.

To celebrate 20 years of cooking and presenting in 2016, James embarked on his first UK tour, Plates, Mates and Automobiles, selling out giant venues such as the Hammersmith Apollo. He went On the Road…Again in 2018. 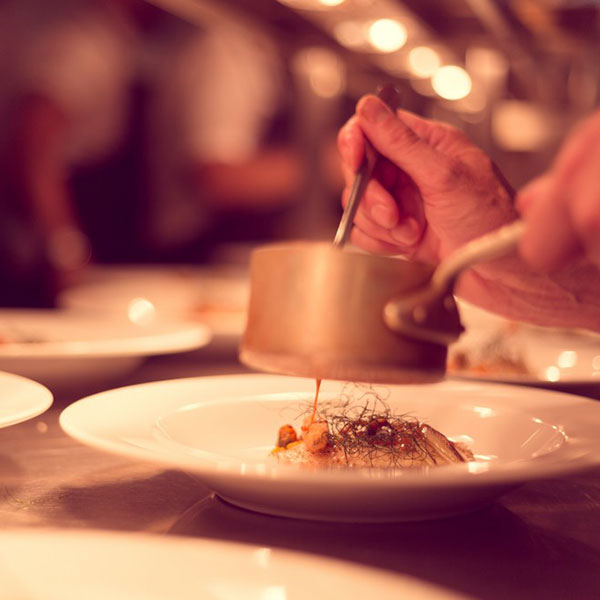 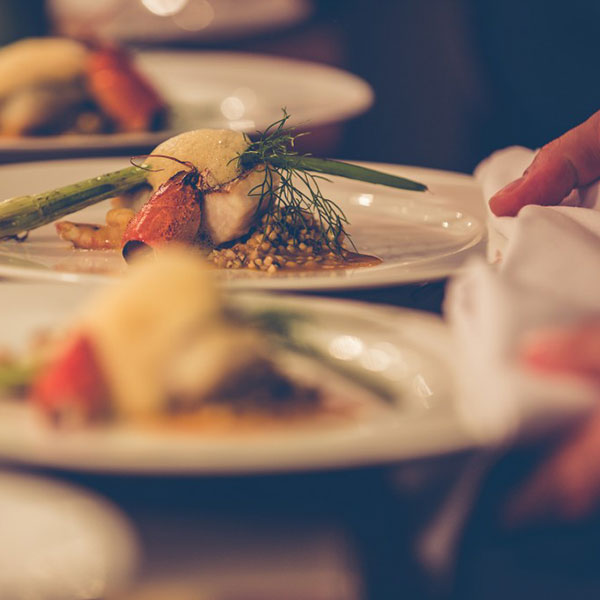 James’ first signature restaurant was Leeds Kitchen in Clarence Dock which launched in 2011 and became the first UK casino restaurant to win a place in the Michelin Guide.

Restaurant number two opened the following year at the Talbot Hotel in James’ hometown of Malton, prompting Observer food critic Jay Rayner to describe his meal there as “the single best plate of food I have been served this year”.

James Martin Manchester at Manchester235 started wowing diners in 2013 and made The Sunday Times Top 100 Restaurants list within two years.

In 2017, James opened The Kitchen Cookery School and Restaurant at Chewton Glen, almost 25 years after he worked there as a junior pastry chef.

James set up Britain’s first cookery school at sea in 2014 when he began working with P&O Cruises on their new ship Britannia.

He is a consultant for Thomas Cook airlines, helping to develop and test their menus, and also an Executive Chef for Virgin Trains East Coast, designing their first class menus.

And in his spare time…

James spends as much time as possible with his beloved dogs…when he’s not racing cars (Mille Miglia 2007 and 2015 as part of the Jaguar team), indulging his passion for motorbikes, getting in the flying time to maintain his private pilot’s licence, and learning how to fly helicopters. 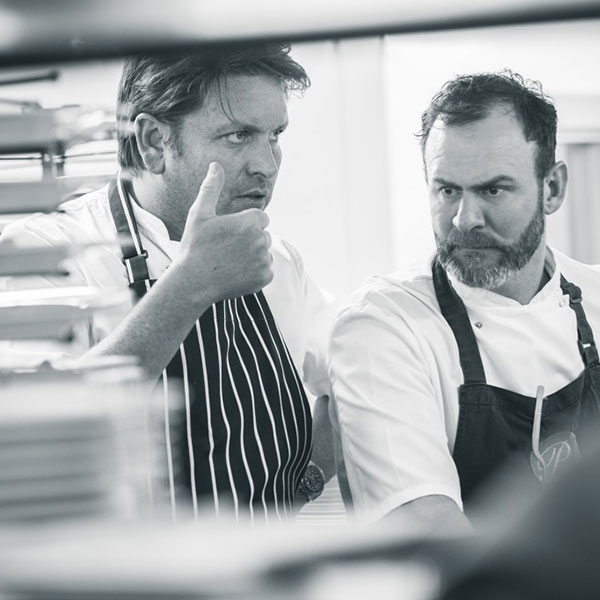 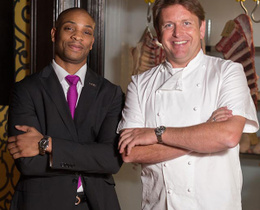 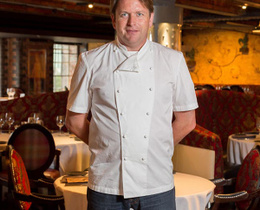 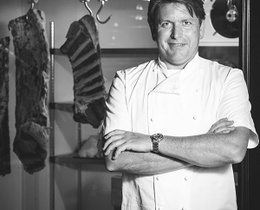 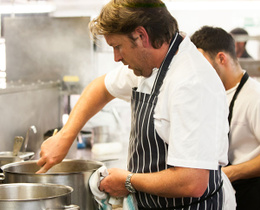 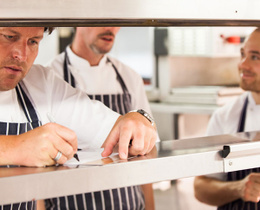 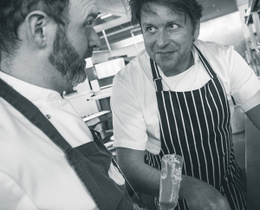 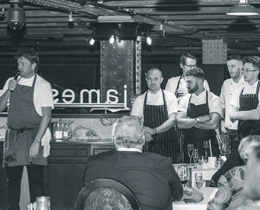 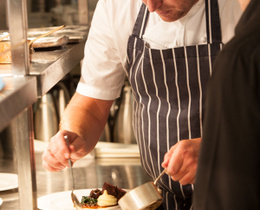